Shukatsu : The Hell for New Graduates

Unknown
Add Comment
Japanese, Job hunting, Society
"College is the spring break of life.
You can only play while you’re still in university."

These are all various sayings which has known to describe their college lives. After all of the time spent studying for entrance exams, they get to cut loose, party, hang out with friends, and occasionally attend class. But in the third year of study, in the month of December, it's time to get down to brass tacks. This is when it's time for shukatsu (就活 - job hunting).

The actual term is shushoku katsudo (就職活動 - the activity of job hunting). Like the wasted last year of high school, which is known as ojuken senso (お受験戦争 - entrance exam war), students spend their last year focusing on the next state of life, trying to a naitei (内定 - offer of employment) when they're still shinsotsu (新卒 - new graduate). During the process, they might also attend a few of their college classes. 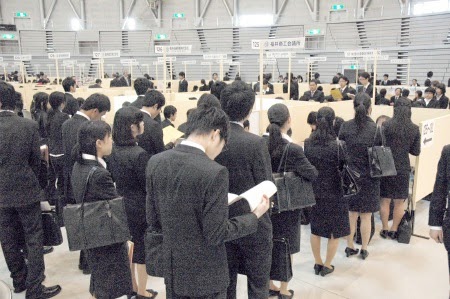 In general, here is the process that students will follow to get their first job:


- Introductory seminars on job hunting: begin in October and are required by universities to better prepare their students. During these seminars, everything is addressed: how to write résumé and cover letters, how to dress, how to talk …

- Announcement of jobs offers: made by the vast majority of companies on December 1st at midnight via the Internet. Most large companies have agreed to follow the same process and the same dates of employment.

- The beginning of the research: each student must now prepare by doing advanced research on companies of his interest, just like treasure hunting. The one who get more information and memorize them get chance to have a reward (a job).

-  Companies seminars: seminars that take place everywhere, in which companies present their offers and try to attract applicants. Candidates can be counted in tens of thousands at each of these giant seminars. During these seminars, companies disclose information that are impossible to find elsewhere. Students need to get there.

- SPI test: a national test (other tests are available and depend on the demands of the companies) that students can take to assess their knowledge on several subjects (English, mathematics, Japanese …). Just pass it once and send the results to the companies, along with the application. Better are the results and better will be the chances of success. The majority of students revise much for these tests.

- Personality test check: Some companies require students to pass a test to assess their personality.

- TOEIC or TOEFL: companies will ask students to take the TOEIC or TOEFL with score increments to obtain. For example, the company Rakuten requires a score of 800 points out of 990.

- Sending the application: this is the crucial moment. The student has defined the companies he wants to apply to. Now he must send his résumé, cover letter, Entry Sheet (reasons for the application in the enterprise, strong points of the student, motivation and student’s presentation) and the results of his tests. It is with this that the company will decide to continue with the student or not.

- Group interviews: if the student passes the previous steps, he is called to a series of group interviews. In general there are 2 or 3 recruiters for 5 or 6 students. These interviews can be conducted 2 times if the company has decided so. These are discussion groups with other students.

- Final interview: Here is the last step where the student will have an interview to determine definitively whether or not he will be hired.

- The promise of employment: once the decision is made; the student receives a job offer. Here it is, the process is over.

As you can see, the recruitment process is very long, but that's just described for a single company, so if students apply to dozens of companies, they will have to do it for each of them. Imagine going to interviews for 20 or 30 companies. This is what the majority of students, in the third year of university in Japan, have to do. Some even postulate to more companies than that. It is a matter of choice and strategy of the student.

Students who do not reach a decision about their employment before graduating from university often face great hardships searching for a job after the fact, as the majority of Japanese companies prefer to hire students scheduled to graduate in the spring. In recent years, an increasing number of student that failed to get a jobs have chosen to repeat a year to avoid being placed in the "previous graduate" category by companies. Under the current system, Japanese companies shuts out opportunities for students who study overseas or have already graduated.

Title : Shukatsu : The Hell for New Graduates
Description : "College is the spring break of life. You can only play while you’re still in university." These are all various say...
Rating : 5

0 Response to "Shukatsu : The Hell for New Graduates"